The Making of a Mural

Last winter while at the Bachelor crest skiing most late afternoons, I became very interested in doing a 360 degree view painting. This would be one moment in time and viewed from one spot.  I did five charcoal drawings moving from one segment of the landscape to the next until the last drawing came around to the start. The idea was to do one long painting that would encompass the work. However I did not take the idea further at that point.

•  Late last summer (2010) I was shown the skeleton structure of the inside of the new Creede Repertory Theatre that was due to open in July of 2011. Earlier I had been asked by the theatre board to do a mural on the exterior south wall. After thinking about it I turned it down or at least delayed the decision mainly because the south light would be too harsh on the paint. But when I entered the building I was struck by the incredible blank wall in the lobby and knew that was where the mural should be. The wall is protected from too much direct light and is the perfect space and dream space to do a work. I felt like Gully Jimpsem in “The Horse's Mouth,” discovering a wall on which to do his painting.  Not only was this a great space but I became immediately aware that this is why I had been doing drawings at Bachelor Mountain the previous winter.

•  My next question was - how was I going to claim two months or more to do this project uninterrupted and still be financially sound?  While in my hotel room late one night in Myrtle Beach, SC, while teaching a workshop, it came to me.  Why not select a few dedicated patrons who are closely connected with my work but also with Creede and the CRT and ask each one to contribute $2500, then honor them with a plaque by the mural?  I did not want a lot of income but enough to pay for the panels, paints and supplies, mounting on the wall and the final framing, plus enough to get me through two months. In a short while Marta and I composed a list of thirty some names to consider. At this time I have asked three patrons and each one has said yes. It looks like the funds will not be a problem.

•  So I set to work on the project. At a fortuitous time I found myself in New York to help jury the AWS 2011 exhibition. I say it was perfect timing as things come when you ask or when you need them if you are open. While there a few friends and I went to the American Hispanic Museum to view the Sorolla paintings and mural. The mural is 144 ft. and surrounds the room. It had recently been cleaned and the room renovated for perfect viewing. The mural is incredible and really got me charged up. What I did notice is how he shifted the shape of the mural when it was over a door and then how he brought it down on the right side. It seemed to be a great idea for my mural as the landscape rhythm moves from the valley floor to the Bachelor crest and back! So that got me thinking. I had been in the CRT building and measured the wall space. The height that I had to work with was 7 1/2 feet and the length was 32 feet. This was the perfect space for this idea. I began sketching out shapes for the space and decided to use Ampersand’s aquabord panels for the support. I found the largest they make the panels is 4’ X 8’ so the composition needed to fit within this boundary.

After many compositional sketches considering the wall space and the panel relationships and numerous calls and emails to the Ampersand company, I decided on this shape. The center panel would be 4’ X 11’. This would be actually two panels placed together and connected on a back frame held together with wood glue and counter sunk finish nails that would be covered up. Connected to each side of the center panel are two 3’ X 5’ panels that are flush with the middle panel at the top but go 1’ further down on the bottom side. Then connected to the outer sides of these panels are two 3’ X 7’ panels. All of these will eventually be connected with a 1” X 4” frame underneath. The segments of these frames need to be in place before I begin, so Dwayne Lewis, my friend who is now constructing our garage, will do this as soon as the panels arrive.

•   The panels arrive and Dwayne and his daughter Alysia constructed the frames on which the panels were mounted. They were glued and nailed with a finish nail gun and the frames and the panels fit perfectly. Dwayne did one other thing that was masterful. He placed “biscuits” to connect each panel to the next and lined them up perfectly.  When I began painting I could lock the following panel to the one I was working on and then have a perfect transition.

•   I set up my studio in the space above the gallery. There is plenty of room and good light and I can still use my studio out at the house for other works and projects. The added benefit of working in town is that this is a public project. As opposed to working in isolation in my main studio so that I do not have interruptions, I welcome people from the community to view this work in progress. I want people talking about the mural and checking it out. So I have begun this project. At this time I have two and one half panels of the six fairly far along. So far it is a dream. The surface of the clay board is like magic. The paint melts like butter on the panel and it lifts easily while still damp. The temperature is cool in the space, even with two heaters going full blast and on a cloudy day it does not warm up. But most days the sun burns through and warms the space. I think there is an advantage to keeping it cool. If the paint and panels are at a low temperature the water does not evaporate as quickly, giving me more time to work.

•   The first panel is a horizontal 3 1/2’ X 7' shape representing the meadow of Bachelor. Moving to the left  the “upriver valley” is represented while to the right the tree patterns have a syncopated beat that move to the vertical panel. The sun is setting and burns edges of the ridge in yellow-orange to red-orange. All else is in shadow.

•   The second panel (7’ X 3’) connects to the first but is heavily wooded with aspen and spruce. This also is in shadow and is the path that I use to enter the woods when cross-country skiing. Some tracks are faintly represented. Hints of sunset light touch a few branches and aspen trunks - hints of warm against predominant cool. The fun of the cool is the warm and cool - cool. I am playing with a true neutral gray mixed with phthalo blue and pyrrole orange and then use strong ultramarine (warm blues) against phthalo (cool blues) throughout the snow patterns. The paint application is very juicy and Impressionistic. I must say that so far the mural seems to be painting itself. I am just there to obey and fill in the blanks. Every step seems to lead me and tell me where to go and how to go about it. Each evening after painting I go to ski at Bachelor and usually do some sketching and photographing to prepare for the next session. I am usually two to three days ahead. The third panel is 4’ X 3’ and is part of the next panel that is 4’ X 8’. Thus it is truly a 4’ X 11’ shape that is the center of the composition. It transitions from the previous panel of aspen and spruce patterns in shadow to the ridge of alpenglow moving to the La Garitas. I have been working on this panel for the last two days and so far it goes well. Tomorrow I hope to complete and begin the transition to the largest shape. I spent the evening skiing and from 5:15 PM to 5:45.  I sketched the mountains and witnessed the alpenglow. I am ready!

•   This all took place by mid-January and the panels did finally arrive, were constructed masterfully (with biscuits linking the panels together) and I began working in the space above the gallery. I found that the Aquabord was the ideal surface for the project. And I decided soon that this had to be my expression, that I could not worry about how viewers judged the finished work but I needed to use my strengths and work with my mark. It is a watermedia approach using washes, lifting, layering applications as well as juicy opaque work. I spend considerable time up on the mountain doing studies and taking photos and each late evening do a ski. At the end of the workout I turn to each of the four corners of the landscape to bless, give thanks and to honor it. And I must say that I have been led through the project to this moment. As I come to the next problem or need a transition to the next panel, nature reveals the answer. The light hits a certain way or the paint flows in a particular fashion that I react to and it takes an unexpected turn but one that is necessary. 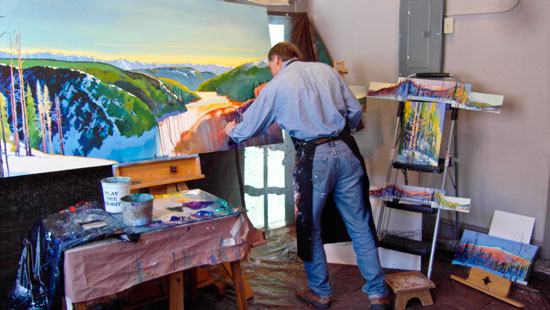 It is now March 6 and I am finishing panel #5 and working the transition to the last panel. Yesterday I was up on the mountain in the afternoon and did two drawings of the mountain formations above the valley floor. It was blustery while I sat on the rear opening of the tail of my vehicle and it was cold enough that my litho #2 crayon was stiff and would just give me a weak, waxy mark. For this panel as well as the last two I am doing a more finished small color study. All of this preparation is so helpful in letting me go when putting that paint on the large panel. 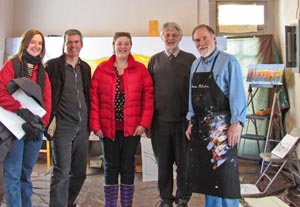 •   A couple of weeks ago Mo, Renee, Sarah and Damien Cheshire from England came to the mural studio and did a video interviewing me, talking about the work, my relationship to the theatre and my evolution as a painter living in this beautiful village. They are putting it on the website as well as youtube.

•   Each evening religiously I go to the mountain and ski. Although I have spent every winter for the last twenty years doing this, it seems that this year is even more meaningful. The trees and the mountain forms have become old friends and they continue to greet me and reveal a deeper place, a more meaningful place. Although I see March 18 as a finish line when my workshops begin again I do not want this to end. It goes well.